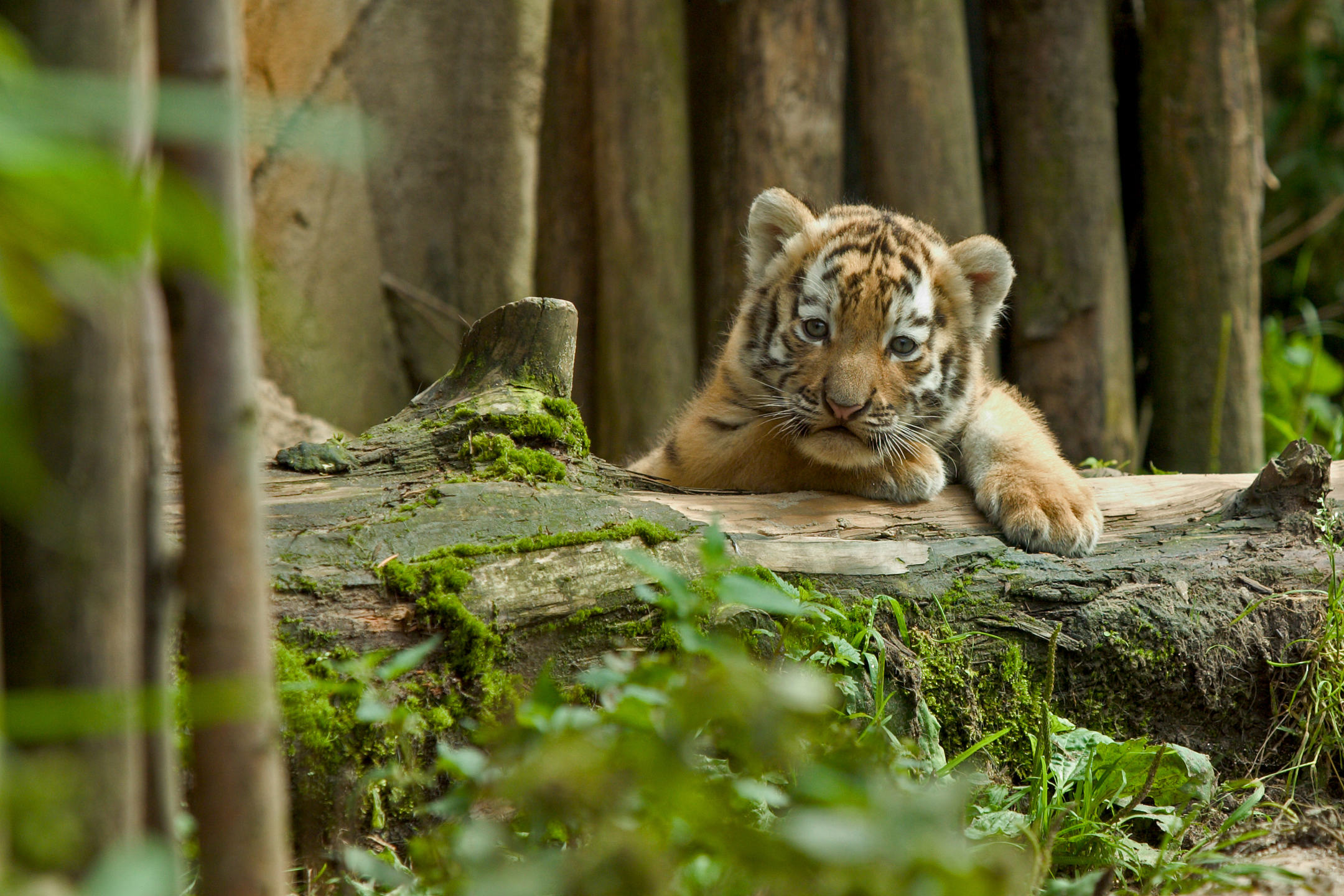 The roar of a tiger can be heard from up to 2 miles away.

These mighty beasts are meant to roam free and hunt for their survival, not rely on humans to feed them three meals a day.

While most people understand the dangers of keeping them as pets, both for themselves and for the animals, others still claim that they can tame them. Research indicates that in the United States, more tigers are kept as pets than there are in the wild.

Some are under the delusion that baby tigers can be tamed and domesticated. Domesticating these wild cats entails using abusive methods like inflicting physical pain on the animals, them, and generating a sense of fear in the animal so that it will succumb to the will of the humans.

Read on as we delve into why taming baby tigers is almost impossible.

While tigers may display some behaviors that are similar to your pet cat, they’re much stronger and very dangerous. Full-grown tigers have the ability to kill massive animals like antelopes, which may weigh up to 500 pounds. They also have a tendency to mark their territories, which can cover a span of 40 miles for males and 7 miles for females.

While tiger cubs may seem cute and playful, they grow rapidly. Newborn cubs weigh around 2-3 pounds and may grow up to weigh around 300-600 pounds, depending on the breed. They also develop sharp canines that are a few inches long and claws that can tear right through your flesh.

While you may enjoy playing with your tiger cub, once it’s big enough to knock you over, it’s only a matter of time before they bite or claw you strongly enough to kill you. Contrary to what many people think, there’s no such thing as a “tiger whisperer.” Their nature is unpredictable, and even if you’ve tamed a tiger for years, it can turn on you and maul you to death in an instant, even if it hasn’t reached complete maturity.

Their Need for Extra Space

Tigers need plenty of space to run, jump, swim, and climb trees, something they have easy access to when they’re in the wild. You’re going to need a massive plot of land to give tigers their freedom and to keep them from getting upset due to their state of captivity. Even so, escaping is no big feat for them. And once a tiger escapes your compound, its main target will be any humans in sight.

Within this compound, you need to give the tiger access to plenty of trees and other toys so that it doesn’t get bored. If it gets bored, its health will start depreciating, and the chances of it trying to run away will be higher.

Many cruel tiger owners (as well as petting zoos and other tiger facilities) choose to keep their tigers drugged to prevent them from escaping or attacking humans, which just shows the lengths we’re willing to go to show our dominance over these magnificent beasts.

They Need Lots of Food & Water

If you think you’re always hungry, your diet is nothing compared to that of a tiger. Although the amount they eat varies depending on the species, in the wild, tigers can generally eat up to 88 pounds of meat for a single meal. They’ll kill buffalos, deer, gazelles, fish, or pretty much any animal that crosses their path. A single kill can provide them with a feast for a few days, and they can go without hunting for around 4-5 days after that.

If you’re trying to tame a tiger, you’ll need to provide it with at least 15 pounds of meat daily. Apart from that, tigers bred in captivity lack essential nutrients that need to be added to their diet in the form of supplements. The sick pleasure of controlling a tiger comes with a very large price tag.

They Can Get Sick

Tigers are also susceptible to illnesses like rabies, etc. which will further raise your pet care bill. They may also suffer from life-threatening illnesses like feline leukemia virus, which can lead to cancer. Apart from the difficulty of handling these animals, it may also be difficult to find a veterinarian experienced enough to restore your tiger’s health.

Tiger cubs are dependent on their mothers for milk and food initially and are also licked clean by their mothers, which is beneficial for their health. Taking them out of their natural habitat and trying to tame them can make them weaker and smaller than their wild relatives.

Cubs also learn how to hunt from their mothers and rely on them for up to 3 years to learn the basic skills of survival. By taming these baby tigers, you are handicapping these wild beasts and making them entirely dependent on you for the rest of their lives.

Many people realize that they can’t take care of their “pet” tiger anymore once it starts growing, but at this point, it can no longer be released back in the wild since it hasn’t developed the necessary survival skills.

Many organizations globally are working against the trade and captivity of tigers. You can play your part by donating to these organizations and reporting anyone you know who owns a tiger illegally. Ban any organizations that house tigers you can “pet” and “play” with since these animals are subjected to extreme levels of abuse to make them this submissive.

Instead of trying to dominate these beasts that are meant to roam free, we need to work towards protecting these endangered species from becoming extinct.